Tyv. Banking News. The danish bank Jyske Bank Taken for Document Fake. Help us against the criminal Danish banks Jyske Bank A/S, our former lawyeres Lundgrens from Hellerup was bought by Jyske bank, to harm our case, and withhold our claims before the court. see the evidence here.

11-03-2020 “COPIES OF THE FIRST LETTERS.” HERE IS THE DRAFT AS WE PUT UP THE NEW FRONT PAGE, IS CONSTANTLY UPDATED, YOU GET COPIES OF LETTERS AND ATTACHMENTS IN HIGH QUALITY. IF YOU HAVE ANY QUESTIONS, PLEASE EEL CALL THE VICTIM OF JYSKE BANK’S FRAUD OPERATIONS ON +4522227713

As you can see here are a few letters to Lundgren’s lawyers about the fraud case against the Danish bank Jyske bank, try to look through letters and then ask yourself if there is corruption in Denmark’s largest law firms and and Danish banks.

See appendix we believe supports that Jyske bank in Denmark has paid return commission – bribe to Lundgren’s lawyers for not presenting some of our claims against Jyske Bank, English texts appear on all pictures that come much more, since it no longer only is a case of fraud as it is written in all emails and written to Lundgren’s lawyer partner company

Banking finance news In the case BS-402/2015-VIB Where, among others, Thomas Schioldan Sørensen of Rödstenen lawyers, and lawyer and partner Dan Terkildsen of Lundgren’s lawyer partner company, in bad faith have countered their client’s claims against Jyske Bank A/S For deliberate and continued gross fraud was never filed by the client’s attorneys. The client believes that both Rödstenen and Lundgrens have worked for Jyske bank in order to disappoint in legal matters. By not presenting the client’s claims to the court. The period during which Rödstenen and Lundgrens have countered their client’s case and claims, have been presented to the court, is during the period between February 2016 and until September 2019 Where the client is forced to fire Lundgren’s lawyers after discovering that Lundgrens, has worked for Jyske bank A/S in a 3 digit million trade. And therefore have been incompetent, and corrupt. The client is compelled to present the final litigation, which is 28/10/2019 If you cannot understand Lundgrens or Rödstenen’s attorneys have not submitted the client’s claims, so you can ask. Rödstenen +45 86 12 19 99 Lundgrens +45 35 25 25 35 Why the client should act as a lawyer himself, and make his final defense, as both Rödstenen Thomas Schioldan Sørensen and Lundgren’s Dan Terkildsen should be the client’s lawyer. The client is personally obliged to present the closing litigation 28-10-2019 according to which their lawyers have taken care of Jyske bank’s interests. And probably to disappoint in legal matters neither Rödstenen nor Lundgrens, submit any of the client’s claims against Jyske Bank A/S. If you cannot understand Lundgrens and Rödstenen’s attorneys, and why these law firms, directly against the client’s continuous instructions, have not presented any of the client’s claims against Jyske bank A/S. Then you can ask them yourself Rödstenen +45 86 12 19 99 and Lundgrens +45 35 25 25 35 Just ask why the client himself should act as a lawyer, and even had to make the closing defense. Since neither Rödstenen by Thomas Schioldan Sørensen and Lundgrens by Dan Terkildsen would be the client’s lawyer. You can find the draft for the new front page that comes on the bank here. When we look at all the inquiries to our attorneys, we look at the mails and letters, we have written since February 2016 to Rödstenen’s attorneys Thomas Schioldan Sørensen. And to Lundgren’s attorneys Dan Terkildsen, until we fired them in September 2019. It is clear that both law firms has had an financial interests with Jyske Bank A/S certainly with Board member Philip Baruch from Lund Elmer Sandager as between man. But Dan Terkildsen believes, that everything are conspiracy theories, at the same time Philip Baruch strongly take distances from the fact that bribery between Jyske Bank A/S and Lundgrens took place. The question is just what the hell did Jyske Bank’s group have to hire Lundgrens for. When Jyske bank’s lawyer Philip Baruch Lund Elmer Sandager, knew that Lundgrens had come on as our lawyer. We do not hide anything, and would like to talk about this here, therefore we play with open cards. The question is whether there are some, who can trust the Danish banks as we here provide evidence of operating fraudulent bank, and deliberately lying, and conceal the truth. Yes even to the seat, Jyske Bank board member Philip Baruch is lying at the same time that Lund Elmer Sandager is presenting manipulated evidence to disappoint in legal matters. If we are wrong why no one will talk to us at all. Don’t you see we actually want to have a dialogue with Jyske bank’s board of directors. Call and +4522227713 And let’s meet as adults. And you just have to go through the case with us. If we are wrong then there is nothing we would rather do, than bring the case against Jyske bank for fraud and false. And bring the chase out of court again because we don’t think this is hilarious.

Here are the first letters that Lundgrens did not want to answer.

Trying to put them in date order so you can follow, around allegations to be made and witnesses to be summoned, Lundgrens 100% counteracts their client here in the case in order to disappoint in legal matters.

Since Jyske bank has bought and paid for our former lawyer to work for Jyske bank. Have we not really have a lawyer until November 2019. And when Jyske bank writes October 30, and asking the court, to disregard the client’s presented fraud and false allegations October 28 against Jyske Bank, to demand attorney’s injunction. Surely so that Jyske Bank could again buy the new lawyer, not to submit fraud allegations, that is the very foundation of Jyske bank. Do you have another explanation ?. But this time the client in Jyske Bank has found a lawyer who is not corrupt and who has promised to bring the client’s case against Jyske bank and that according to the client’s own allegations from 28-10-2019.

What is most illegal for banks. FIND JYSKE BANK Money laundering. Fraud. Document forgery. Exploitation. Maybe bribery. Some of this and more, are Danish customers, in the Danish bank like Jyske bank exposed to. If you do not believe it, ask Jyske Bank +4589898989 they are allowed to answer you. The case is in the district court under case no. BS-402/2015-VIB For the first time since we asked February 2016, the earlier lawyer to present our allegations against Jyske Bank, here we ourselves had to submit them October 28, 2019. You are also welcome to ask plaintiff +4522227713 And if you find anything, that may be wrong. Tell us and we correct it immediately. 🙂 We have found a new lawyer, who is not corrupt, and would like to present the client’s claims against Jyske bank. 🙂 Letters dealing with the case against Jyske Bank for fraud. Covers allegations and evidence against Jyske Bank, in case BS-402/2015-VIB. as Jyske Bank in several ways, has tried to prevent was presented in court. – When our claims document is made, after our closing petition of 28-10-2019, will we share letters from these links. LETTER LUNDGRENS. Do you dare to trust Lundgrens lawyers, if the lawyers are corrupt ?. And cover the Jyske Banking fraud. ?. LETTER RØDSTENEN. LETTER LUND ELMER SANDAGER. Do you dare to trust Lund Elmer Sandager lawyer, if the lawyers are lying in legal relationships ?. And cover the Jyske Banking fraud. ?. LETTER JYSKE BANK. Management and CEO Anders Dam. Do you dare to trust Jyske bank if, the Jyske Bank’s Board of Directors is lying in legal matters, to disappoint in legal matters. ?. LETTERS TO THE COURT IN VIBORG. Including appendix 28-101. Which we ourselves have tried to present on 28-12-2018

Se more at English here, se ewadens and the Chase here, is about a big fraud, by Danish bank Jysje Bank, and hav Lund Elmer Sandager and Lundgrens try to covered it. 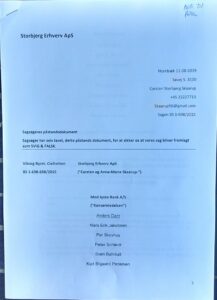 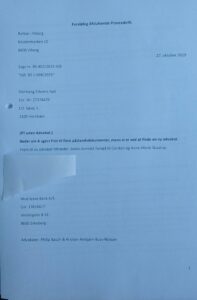 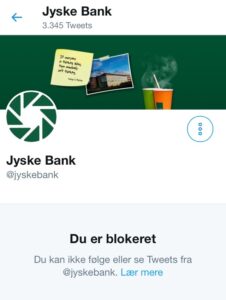 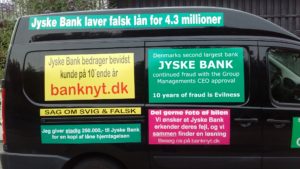 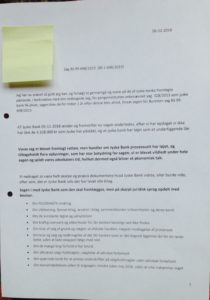 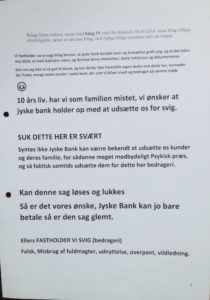 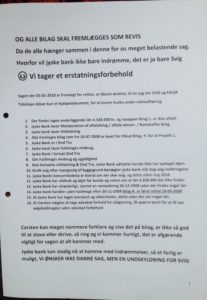 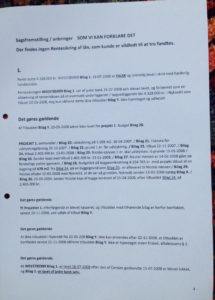 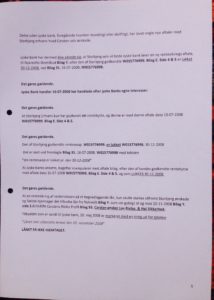 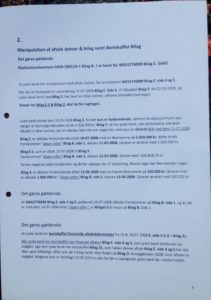 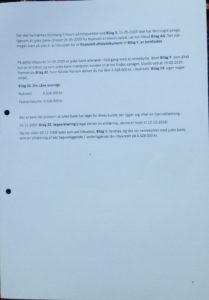 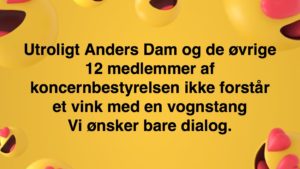 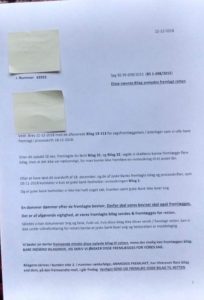 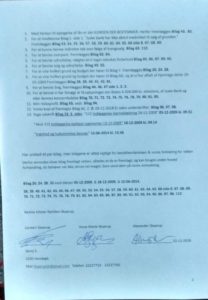 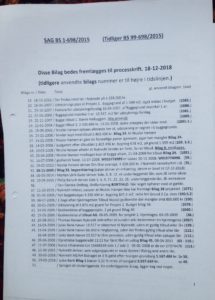 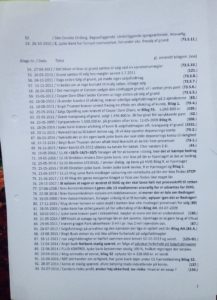 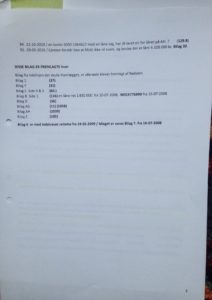 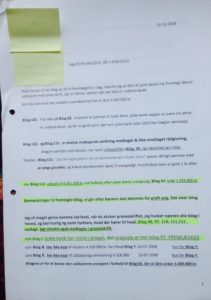 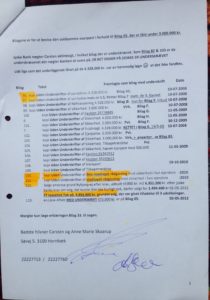 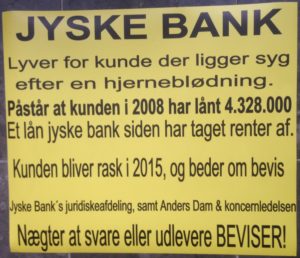 Link til Bilag A – ÅÅ 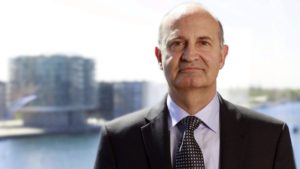 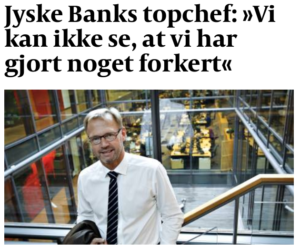 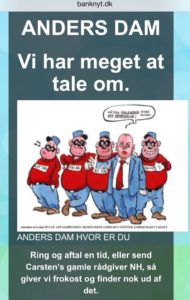 – For bare at nævne en smule. 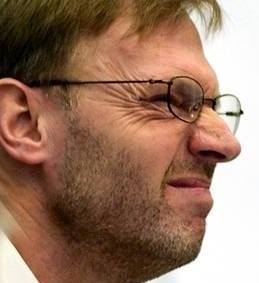 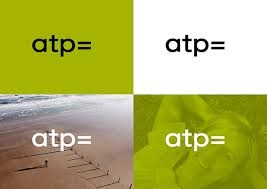 For at forsøge på at hjemtage lånetilbuddet Bilag Y. dette i brev Til Nykredit Bilag AD.

hvilket kun kan være for at ville skuffe i retsforhold.

Vil vi gerne have at jyske bank at overholder loven.

Først i 2016 i forbindelse med efterfo